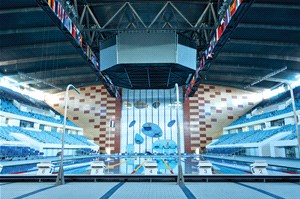 Dubai, UAE | September, 2011 – Rising like an elegant blue wave from the sands of the Arabian Peninsula, the Hamdan Bin Mohammed Bin Rashid Sports Complex is a stunningly futuristic building.
Created by Faulkner Browns Architects and ARUP, its centerpiece is the Dubai International Swim Stadium. The 18,000-seat aquatics complex made its international debut hosting the Fina World Short Course Swimming Championship.

This impressive venue is divided into main pool and training pool areas. Suspended from the soaring arched roof, a long gantry carries a PA system that’s designed for both audio quality and cost efficiency in equal measure.

Bau continues: “The VIP and VVIP stands are covered by two SG151 compact two-way loudspeakers to add a little bit of extra warmth to the sound in those areas. In effect it means we are able to deliver even sound coverage to all 18,000 seats in the stadium with a main system of just eight loudspeakers.”

Facing the seating from the central roof gantry, the six loudspeaker locations – made up of a total of four dual IC Live arrays and two single IC Live arrays – cover the entire main bowl.

Exploiting IC Live’s multi-beam capability, each array is configured in BeamWare to provide three individual beam angles that cover the seating terraces from poolside to just under the roof.

Bau adds: “When we first explored this idea it was quite exciting, as it was the first time we’d looked at covering such a huge space in this way. But the solution worked in EASE simulations; it met the budgetary requirements; it gave the stadium owners an almost invisible system – and it’s performing really well. It’s great walking up and down the spectator terraces and hearing equal intelligibility and transparency everywhere.”

The training pool hall has its own system, using two IC24s, while a total of 80 Iconyx loudspeakers cover the cafeteria and other public spaces, and just two Iconyx IC32 columns cover the entire Grand Foyer.

A Biamp-based CobraNet network and a secondary analog network, plus full integration with a secondary voice alarm system, ensure compliance with all international VA/PA safety standards.